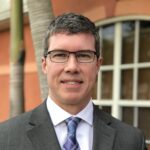 During his training, Stephen developed a love for obstetric (OB) anesthesia and decided to specialize in it. He has also trained hundreds of anesthesia students over the years as a clinical instructor.

It was during this time of working in OB that Stephen became very familiar with using ketamine as a pharmacological agent for surgical pain. When he discovered it was being used to treat mood and pain disorders in outpatient settings, he sought out a former colleague who was using ketamine to successfully treat people who were once thought to have been treatment-resistant.

Stephen took an extensive training course and became certified in the use of ketamine to treat patients suffering from depression, suicidal ideation, anxiety, PTSD, OCD, and many pain disorders. At that time, there were no clinics in Naples that offered ketamine infusion therapy, and Stephen was convinced that Naples needed one.

Stephen was also convinced that he should make available an alternative treatment for people who don’t respond well to medications.  Transcranial Magnetic Stimulation (TMS) was found to be the best non-pharmacological therapy available.  He was trained by Mag Venture, the company that developed Intermittent Theta-Burst (iTBS).  This is the ultra fast, 3.5 minute treatment that has the same effectiveness as an 18 minute treatment.

Stephen and his wife Liz, who is a registered nurse (RN), started Dura Medical, LLC in 2018 to help as many people as possible experience healing from mood disorders and chronic pain.